Hard lives. Hard lessons. It's murder on the streets.

Danielle Crosby had a body to die for. A body she sold to the highest bidder. But she ended up paying for it with her life.
When a prostitute’s body is found lifeless, mutilated and brutally raped, DCI Annie Carr has never seen anything like it and never wants to again. Kate Burrows, retired DCI now consultant, has plenty of experience when it comes to murder – after all she caught the Grantley Ripper and broke the biggest paedophile ring in the South East. She is determined to help put the killer behind bars. But whoever it is won’t be easily caught. And when another girl’s body is found, even more horrifically disfigured than the last, it’s clear the killer is just warming up . . .
In a ruthless world where everyone’s out for themselves, Annie and Kate must dig deep if they hope to catch a callous serial killer who knows no limits and makes no mistakes. For some, prostitution is seriously big business. But how many people will pay the ultimate price? 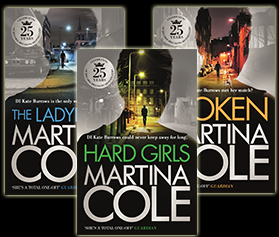 Martina Cole’s first police procedural novel, The Ladykiller, was published in 1993. Before this, Martina had chosen to write very much from the perspective of the criminal, but in The Ladykiller Martina tells the story from the side of the law through…